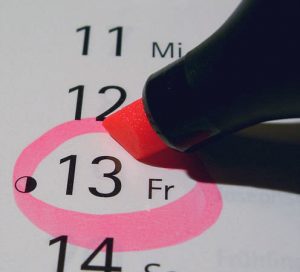 Imagine a day on which ships will not leave the harbor, lovers will not propose for marriage, businessmen will not start new projects, tourists will not fly, lawyers will not sign contracts. Millions of people in the world believe that Friday that occur on the 13th, is subject to disasters and misfortune. The fear of that day, is so deeply embedded in the western superstition that it has a scientific name: paraskevidekatriphobia

The origin of the superstition surrounding this day is not clear.  A suggested origin is Friday, 13 October 1307, the date Philip IV of France, also known as Philip the Fair, arrested hundreds of the Knights Templar, tortured them until they gave false confessions, and burned them on the stake.

Another option suggests the superstition might have arisen in the Middle Ages, originating from the story of Jesus’ Last Supper, in which 13 people were present: Jesus and the 12 Apostles.

But the fear of the number 13 is not related only to Fridays and it is reflected in our daily lives. Have you seen seat number 13 in an airplane or floor number 13 in a skyscraper ?

Why the number 13 is considered to be unlucky we don’t really know. Maybe following the privileged number 12, created a huge gap in expectations… 12 got all the respect – a dedicated name “dozen” and a symbol for perfection: 12 months in a year, 12 Apostles, the 12 tribes of Israel, 12 is the number of maximal differentiation.

In contrary, the Jewish tradition considers the number 13 as one of the important and blessed number.

A year must contain full cycles of the moon, so every 4 years the Hebrew year has 13 months, when a Jewish boy comes of age 13 years old he has become a Bar Mitzvah. A Jewish girl, celebrates her Bat Mitzvah when she turns 12. The Rambam has stated the 13 Fundamental Principles of the Jewish faith, The core of the Selichot prayers is the 13 attributes of mercy that God taught Moses.

In the modern age, a special reference is given to Friday the 13th in horror movies and computer viruses, designed to operate on that day.

(from Wikipedia and Mako)